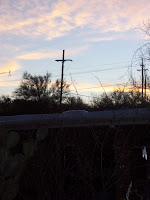 I want a life of ease, wealth and pleasure. That sounds good. I fantasize about such a life. But is that what I choose to pursue? Partly, and partly not. Many times it seems I've chosen struggle instead. Not consciously, mind you, but that has been the net result.

I guess one could say such an approach must be based on some form of neurosis, or unresolved issues from childhood. Why not have a good life? Is our country not founded on the "pursuit of happiness"?

But of course, there's the rub as they say. Happiness is not all that simple a proposition, when you get right down to it.

It isn't the same as pleasure although many people confuse the two. It isn't having wealth or an easy life. It isn't even having an atrractive and loving partner or work you love (these two are a little closer to it), although we are told these things will make us happy.

I think that happiness or contentment, if it is found anywhere on this planet, only comes from the gradual revelation of the inner self, the spark of creation that we are each given. The context where this occurs doesn't matter, nor does the fullness of such expression. All that really matters is the effort.

Just how presumptuous and even blasphemous is it for us to suggest that the Mind of God might even be broached by the ramblings of two middle-aged, not particularly religious nor efficacious men?

The mind of man in search of the Mind of God yields that minimal openness which allows God to operate within the geography of our existence. Can God make a rock so big that He can't lift it? It's not the right question. God chooses to allow us an option; it's the essence of love, which is God.

So we're just poking enough holes in the walls built around our lives to maybe let the breath of God blow through it. And suggesting to you that the wind blows where it wills, but if you want some fresh air you may just have to open the window a little.
Posted by David M at 5:00 AM No comments:

I'm not sure what's going to come out here, but Dave is pushing me, so I'm letting myself be pushed. My objective is to create the Proof Of Concept, i.e. to prove that we can actually publish something in this blog. Yes, I'm aware that is not a significant goal as people blog everyday and it works. But there is the other facet of doing something, and that is that you can say you can do something a million times, but until you actually do it, it's all smoke. "Yes, I can write something for a blog." Not if you don't do it. This is nothing so far, but it is something. Mind of man operating so far. We'll see what happens next....

Rainer
Posted by David M at 4:54 PM No comments:

Here it is, the eagerly anticipated initial entry to the mind of man, Mind of God blog.
Posted by David M at 5:42 PM No comments: